A continental-scale plume of carbon monoxide (CO) and other air pollutants from active fires in Siberia is being mapped in near real-time by ACOM scientists, based on data provided by TROPOMI (the TROPOspheric Monitoring Instrument, on board ESA's Sentinel-5P platform). Figures 1 and 2 illustrate the magnitude of CO emissions during this fire season (summer 2019) compared to the same period last year (2018).

CO observations are used for studying both climate change and air quality in the atmosphere. Tropospheric CO is generated by incomplete combustion (of fuels, biomass) as well as by oxidation of methane and other hydrocarbons. CO's main sink is oxidation by OH-; this reaction produces greenhouse gases such as carbon dioxide and tropospheric ozone. Additionally, OH- taken up in CO oxidation is not available to break down other greenhouse gases such as methane. As a consequence, CO emissions have a positive indirect radiative forcing effect. CO is also a harmful air contaminant. Because of an average lifetime of weeks to months, it is often used as a tracer to monitor the distribution, transport, sources, and sinks of polluted plumes.

CO and other trace gases and aerosol emissions from the Siberian fires as well as from local fires are being currently measured in situ in the context of FIREX-AQ (Fire Influence on Regional to Global Environments and Air Quality; Boise, ID and Salina, KS). This ongoing NOAA-NASA airborne campaign is using near real-time satellite data from (among others) TROPOMI and MOPITT (the Measurement Of Pollution In The Troposphere instrument, on board NASA's Terra platform) as well as NCAR-ACOM's model WACCM (Whole Atmosphere Community Climate Model) forecast results (Figure 3) for flight planning purposes.

While TROPOMI, thanks to its superior coverage and horizontal spatial resolution, captures better CO emission events in 2D, MOPITT has the ability to resolve CO in the vertical dimension, thus allowing for the separation of local versus transported CO pollution. Figure 4 shows that on August 4 2019 MOPITT saw elevated CO close to the surface in Siberia (near the fires) and at 300-400hPa (7-9km of altitude) over Vancouver Island (SW Canada, Figure 5). The TROPOMI maps reveal that, on that date, the CO plume from the Siberian fires had traveled all the way across the North Pacific, reaching Canada and the USA. 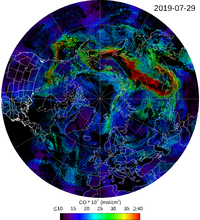