ACOM scientist Simone Tilmes was quoted in Live Science about a proposal to use salt in the upper troposphere to increase the atmosphere's reflectivity and thereby cool the earth. Unlike some other aerosols, sodium chloride (table salt) is not harmful to the earth's ozone layer. Tilmes cautions that salt often includes reactive iodine, an element that could also play a role in atmospheric chemistry. 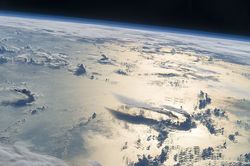