Satellite observations have revealed that cirrus is very prevalent near the tropopause throughout most of the tropics. Cirrus is formed by several processes: a) in-situ rising and freezing of a humid layer, b) blow-off by deep convection, and c) initiation of cirrus formation by the cold temperature perturbations of dynamical waves. The cirrus is of interest since the cirrus restricts the amount of water vapor that is transported from the upper troposphere into the lower stratosphere.

With the advent of HIRDLS and CALIPSO experiments, one can study cirrus in greater detail than by previous experiments. HIRDLS is a limb viewing emission spectrometer and CALIPSO is a nadir viewing lidar. Massie et al. (2010) demonstrates that laminar cirrus (i.e. isolated cirrus of small vertical width) is located preferentially away from deep convection in winter over the Maritime continent (e.g. Indonesia). The seasonal maps of laminar cirrus presented in Massie et al. (2010) are the most complete maps of this type of cirrus. Massie et al. (2010) discusses the seasonal variations of the vertical and horizontal scales of the cirrus. Horizontal lengths are largest in winter (December – February) and shortest in summer. Future changes in cirrus geospatial distributions will likely modulate changes in stratospheric water vapor and stratospheric chemistry, and thus the study of Massie et al. (2010) is tied to an important potential physical component of climate change in the stratosphere.

Two figures from Massie et al. (2010) are presented in this research highlight. The first figure illustrates that the HIRDLS and CALIPSO data can be used to determine monthly distributions of cirrus and that the two experiments report similar cirrus geographical distributions. The second figure demonstrates that details of isolated cirrus layers can now be studied on a seasonal basis. Both figures illustrate new observational capabilities.

HIRDLS and CALIPSO cloud frequency of occurrence at 161 hPa and 13 km during April 2007 and MLS RHI at 177 hPa. MLS relative humidity with respect to ice (RHI) values are less than 100 percent because the MLS vertical of view is 4 km and cirrus is typically less than 1 km in vertical thickness.

Seasonal variations of isolated cirrus frequency of occurrence at 121 hPa and 15 km. CALIPSO cirrus vertical widths are 1 km or less. Cirrus layers are present away from the maritime continent (where deep convection is present). 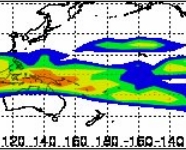