ACOM Scientists recently participated in a field campaign in a forested area of Northern Michigan. The PROPHET-AMOS campaign – Program for Research on Oxidants; Photochemistry, Emissions and Transport - Atmospheric Measurements of Oxidants in Summer – took place through the month of July 2016 at the PROPHET Lab and Tower near Pellston, MI. The goal of the project was to study the cycling of chemicals between the biosphere and the atmosphere, and to understand the roles of various oxidants above and within the canopy of a northern forest. Approximately 20 research groups participated; ACOM’s team (Geoff Tyndall, John Ortega, Deedee Montzka, and Andy Weinheimer) measured concentrations of NO and NO 2 from a manifold running from the top of the 100-ft tall tower down to the lab. The project involved a comprehensive suite of measurements of ambient concentrations of biogenic organic compounds, their oxidation products, and various oxidants (O 3 , OH, HO 2 and peroxy radicals RO 2 ). Rates of emission of a number of compounds were also measured by eddy correlation and gradient techniques, as well as by direct measurements employing enclosures placed over branches and over the soil.

The forest consists of a mixture of broad leaf and coniferous trees. However, the chemistry was dominated by isoprene emissions, and up to 90% of the OH reactivity was due to isoprene. A number of the measurements were made more challenging by the low concentrations. One of the project organizers, Steve Bertman (Western Michigan University) noted that since PROPHET campaigns began in 1997, the levels of anthropogenic pollutants at the site have dropped noticeably. Under the low concentrations of NO encountered, peroxy radicals react at similar rates with NO and HO 2 , making for a rich suite of product molecules. As anthropogenic NOx levels continue to decline, more and more of the continental US will be in such a transition region between NOx-dominated and NOx-limited chemistry. The results from the PROPHET study will provide interesting insights into the fascinating and vigorous chemistry occurring in this forested setting.

More information from the PROPHET tower can be found at http://umbs.lsa.umich.edu/research/researchsite/umbs-prophet-tower.htm. 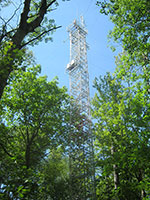