During the summer of 2010, large areas of central Russia were devastated by extensive wildfires burning through forests and dry peat bogs. In addition to the threat from the actual fires, the smoke and pollutants generated by the fires created an air quality crisis for millions of Russians, including residents of Moscow. Figure 1 below shows imagery from the MODIS satellite instrument for Aug. 8; a vast smoke plume is clearly evident. 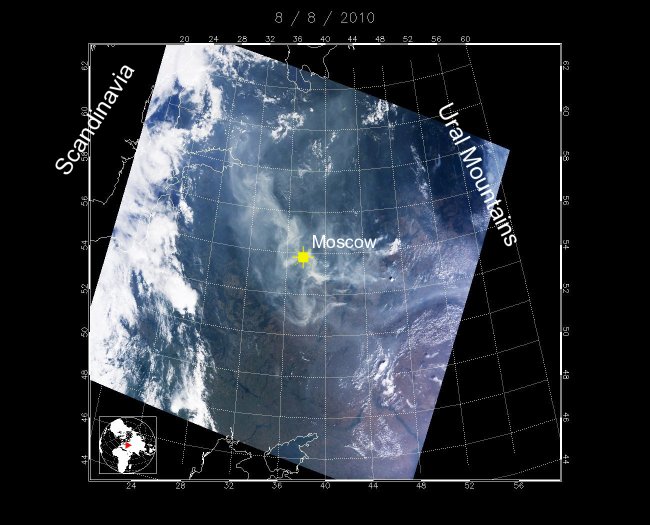 Satellite remote sensing instruments are ideal for monitoring regional pollution events (such as the Russian fires) as they unfold. Satellite products are currently available for (1) the locations of actual fires, (2) column-integrated aerosol (i.e., aerosol optical depth, AOD), and (3) tropospheric carbon monoxide (CO). Observations of carbon monoxide (CO) are important for two reasons. First, CO is a direct threat to human health. Second, measurements of CO concentration can potentially be exploited through 'inverse modeling' methods to quantify the emissions of a variety of gases besides CO (including carbon dioxide, CO2) that may not easily be measured directly. For such uses, the ability to measure CO concentrations in the lower troposphere (near the CO sources) would be extremely advantageous. Unfortunately, however, satellite products for tropospheric CO typically exhibit poor sensitivity to lower-tropospheric CO.

The MOPITT ('Measurements of Pollution in the Troposphere') instrument on the NASA Terra satellite includes gas correlation radiometers operating in two spectral regions. 'Thermal Infrared' or 'TIR' radiometers analyze radiation in a spectral band near 4.7 microns. These observations typically yield information about CO concentrations in the middle and upper troposphere. Simultaneously, 'Near Infrared' or 'NIR' radiometers acquire measurements of reflected solar radiation in a band near 2.3 microns. These radiances provide information relating to the vertically integrated 'total column' of CO. When exploited together in a single retrieval algorithm, simultaneous TIR and NIR observations provide sufficient information for determining CO concentrations in the boundary layer. This multispectral capability, which is unique to MOPITT, has only recently been demonstrated (Worden et al., 2010). The development of new operational multispectral products has required new methods for quantifying 'geophysical' radiance errors (Deeter et al., 2011). MOPITT multispectral retrieval products will first be introduced to the atmospheric community as 'beta' products in the spring of 2011.

Prototype MOPITT multispectral retrievals were recently analyzed for an area in central Russia (bounded by 53 N, 58 N, 40 E and 45 E) between July 1 and Sept. 1, 2010. Figure 2 below compares time series of (1) MODIS fire counts, (2) MODIS AOD, (3) MOPITT CO volume mixing ratio (VMR) anomaly at the surface and (4) MOPITT CO VMR anomaly at 700 hPa averaged over the region. (VMR anomaly values are calculated by subtracting climatological VMR values from retrieved VMR values.) The top panel clearly shows the abrupt onset of the fires starting the last week of July. Before this period, fire counts were negligible, MODIS AOD values were very small, and MOPITT VMR values at both the surface and 700 hPa were near their climatological values. 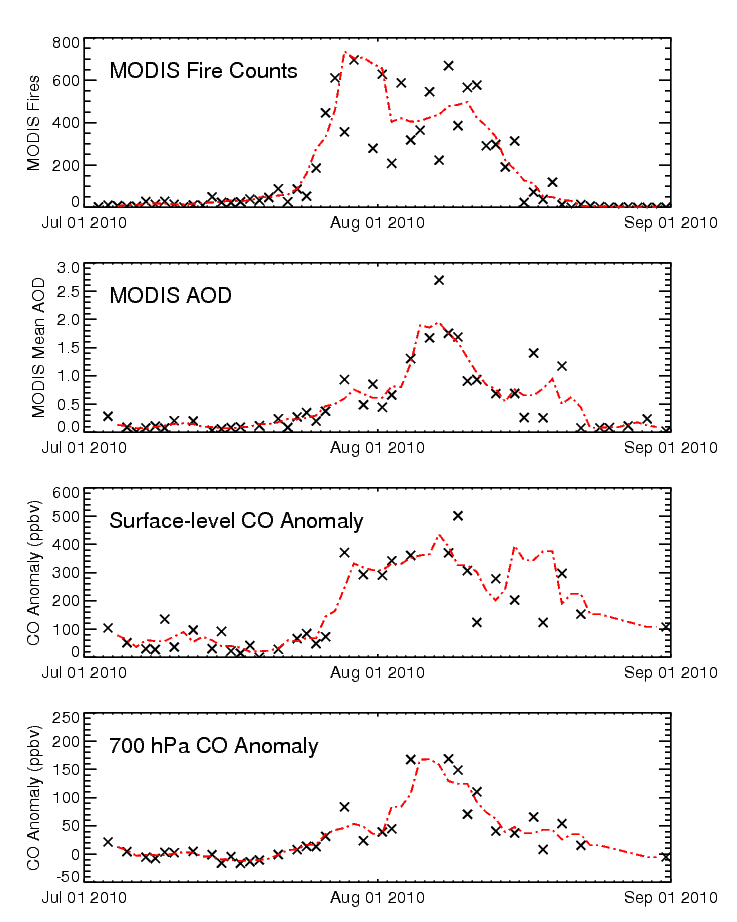 In this case study, the scientific value of the multispectral retrieval product is observed in the timing and magnitude of the MOPITT surface-level and 700 hPa anomaly values. Relative to the onset of the fires in late July, the surface-level CO anomaly rises to very large values (hundreds of ppbv) with very little delay. In contrast, the 700 hPa CO anomaly increases gradually and exhibits significantly smaller peak anomaly values than at the surface. These features are consistent with the expected lag and dilution of the fire-generated CO associated with vertical mixing. 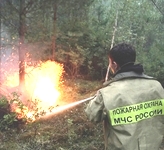