The new Version 5 (“V5”) MOPITT (Measurements of Pollution in the Troposphere) product for carbon monoxide (CO) is the first satellite product to exploit simultaneous near-infrared (NIR) and thermal-infrared (TIR) observations to enhance retrieval sensitivity in the lower troposphere. Since most major sources of tropospheric CO are found at or near the Earth's surface, this feature will improve air quality forecasts and studies of CO sources.

MOPITT’s gas correlation radiometers observe the troposphere simultaneously in both a TIR band near 4.7 µm and a NIR band near 2.3 µm. Multispectral TIR/NIR retrievals have only recently been demonstrated and are one of three CO retrieval products available in the recent MOPITT V5 data release. TIR-only and NIR-only CO retrieval products are also available. The MOPITT TIR-only product is considered the most mature, is the most stable (i.e., exhibits the fewest number of failed retrievals) and is fundamentally similar to CO products from the TES and IASI instruments. The MOPITT NIR-only product is similar to the SCIAMACHY CO product, but is only available in clear-sky scenes over land. Both the V5 TIR/NIR and NIR-only products exploit a retrieval algorithm adaptation to increase the influence of the NIR radiances (at the expense of increased retrieval noise). All three V5 products are available for the entire record of MOPITT observations, beginning in March, 2000, and continuing to the present. Gridded daily and monthly “Level 3” products are also available. MOPITT products for CO include the volume mixing ratio (VMR) proﬁle on a ten-level pressure grid and the CO total column.

The figure above compares retrieved surface-level CO concentrations for the V5 TIR-only, NIR-only, and TIR/NIR products for a MOPITT overpass of the eastern U.S. on October 22, 2008. The panel in the upper left shows a priori surface-level CO concentrations based on a climatology derived with the MOZART chemical transport model. For the scene depicted in the figure, a priori values over land vary from approximately 170 ppbv to about 300 ppbv. Both the TIR-only and NIR-only products indicate regional geographical patterns which are clearly different than the a priori, but are qualitatively similar to each other. For example, both products indicate surface-level CO concentrations significantly smaller than the a priori in eastern Ohio (near 42N, 82W) and central Virginia (near 37.5N, 78W). The geographic patterns evident in the NIR-only and TIR-only products in the figure are also clearly pronounced in the TIR/NIR product.

More information on the MOPITT project and products can be obtained at http://www2.acd.ucar.edu/mopitt/ 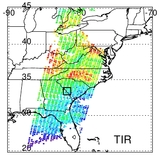