New particle formation, the spontaneous creation of new nanometer-sized particles in the atmosphere, is often the dominant source of particles in remote regions. A major part of newly formed aerosol consists of organic material that can be attributed to photo-chemically reacted volatile organic compounds emitted by vegetation. Understanding the mechanisms responsible for the growth of these biogenic nanoparticles into sizes where they may scatter radiation efficiently or change cloud properties is vitally important for assessing the impacts of new particle formation on climate.

In recent years, substantial progress has been achieved in measuring the chemical composition of nanometer-sized aerosols during various stages of growth. Much of this work has been conducted in a collaborative effort between ACD’s Ultrafine Aerosols Research Group and Peter McMurry’s research group at the University of Minnesota. This team has created the Thermal Desorption Chemical Ionization Mass Spectrometer (TDCIMS, Smith et al., 2004; McMurry et al., 2009), an instrument that can directly determine the molecular species in nanoparticles as small as 10 nm in diameter. In the TDCIMS, size-selected aerosol is collected on a platinum wire by electrostatic precipitation. After collection the wire is translated into an ion source of a mass spectrometer, where the collected material is thermally desorbed and ionized. Ion mass-to-charge ratio is subsequently analyzed in a triple quadrupole or time-of-flight mass spectrometer.

Figure 1. Dr. Paul Winkler with the TDCIMS at the NCAR biogenic aerosol chamber facility. Click on figure for larger image.

Current research in ACD employs a Teflon bag reaction chamber to simulate biogenic particle formation and growth under conditions that closely resemble those found in the real atmosphere. The site of the research is the NCAR biogenic aerosol chamber facility (Figure 1), consisting of a 10 m3 FEP Teflon chamber and instruments for generating and measuring trace gases, oxidants, and aerosols. The NCAR chamber can additionally study aerosol formation from the oxidation of organic vapors from live plant emissions. An example of a formation and growth event is illustrated by the size distribution contour plot shown in Figure 2. As can be seen, first particles appear at around 6:20 pm with an upper size of approximately 20 nm. The size distribution subsequently shifts to larger sizes with peak concentrations steadily increasing. The formation event was initiated by adding increasing amounts of ozone with an upper limit of 50 ppb to a 1 ppb steady state concentration of α-pinene. Figure 3 shows recent TDCIMS measurements of the composition of 80 nm diameter particles formed from the same system. The direct observation of several high molecular weight species in the particles is in good agreement with previous studies from the literature (e.g., Gao et al, 2010), and confirms their important contribution during the early stages of biogenic particle formation and growth. 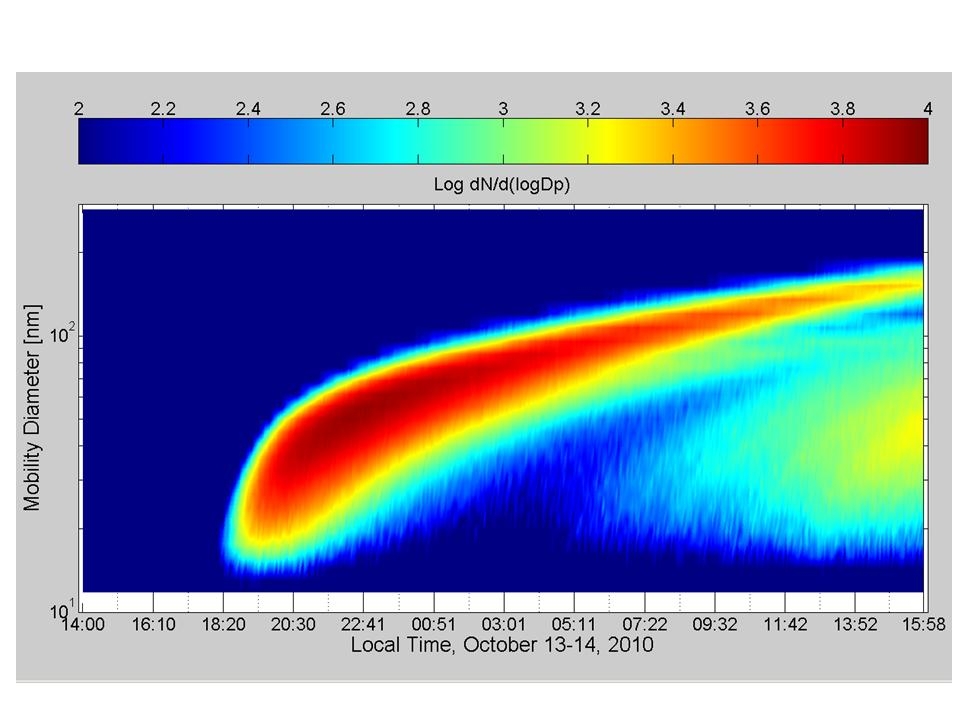 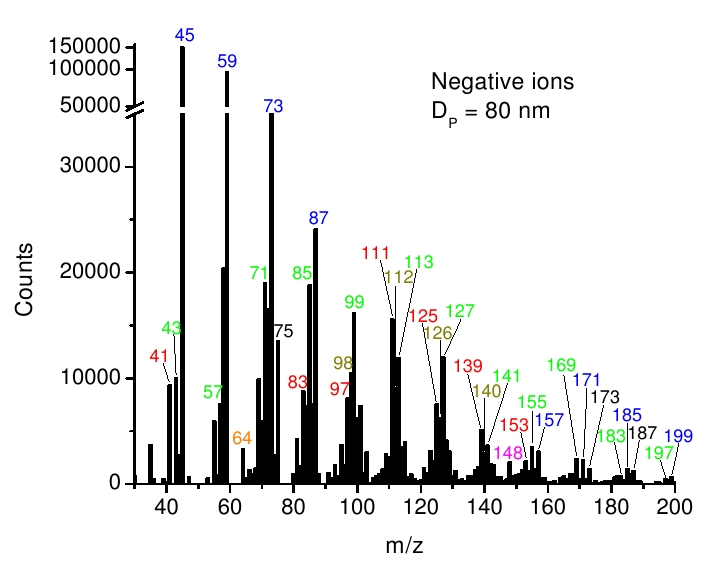 Figure 3. TDCIMS mass spectrum of the chemical composition of 80 nm diameter particles. Several series of homologous species were found in the aerosol, such as monocarboxylic acids labeled in blue. Click on figure for larger image.

This study is led by ASP postdoctoral fellow Paul Winkler, working with members of ACD’s Ultrafine Aerosols and Biosphere-Atmosphere Interactions research groups. The facility will be the center of much activity during the coming year, including (1) collaborative experiments with Prof. Jose Jimenez at the University of Colorado that compare chamber-derived organic aerosol to that obtained with a flow-tube reactor; and (2) a study of aerosol formation resulting from nitrate chemistry with ASP Faculty Fellow Prof. Juliane Fry from Reed College.