The High Resolution Dynamics Limb Sounder (HIRDLS) instrument provides measurements of temperature, trace constituents and aerosols from the middle troposphere to the mesosphere. HIRDLS water vapor will be available for the first time in the soon to be released Version 7. Shown are zonal mean comparisons with MLS v3.3 and profile comparisons with a balloon-borne Cryogenic Frost-point Hygrometer (CFH). The precision is ~10%, and the bias is about 10% in the stratosphere and is typically 10-20% in the UTLS.

Other HIRDLS products newly available in V7 include: ClONO2 and N2O. There are also significant improvements are made to NO2, N2O5, HNO3, CFC11 and CFC12. 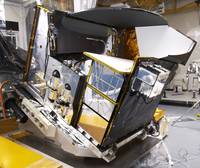