El Nino-Southern Oscillation (ENSO) is the largest source of interannual variability in the tropical troposphere. Some studies have documented the propagation of the ENSO signal to the stratosphere (Calvo Fernandez et al., 2004; Sassi et al., 2004; Garcia-Herrera et al. 2006) through the anomalous propagation and dissipation of ultralong Rossby waves at middle and high latitudes, which modify the stratospheric mean meridional circulation. A recent study using the Whole Atmosphere Community Climate Model (WACCM3.5), has also shown the intensification of the tropical upwelling in the lowermost part of the stratosphere, below 20km, during warm ENSO events and its weakening during the opposite phase (Calvo et al. 2010). This is mainly due to anomalous forcing by orographic gravity waves especially during the strongest warm ENSO episodes; as a result of anomalies in the location and intensity of the subtropical jets and in the meridional gradient of temperature observed during ENSO episodes.

To our knowledge this behavior has not been documented in observations but has the potential to introduce low-frequency variability in water vapor time series that could confound the estimation of secular trends. 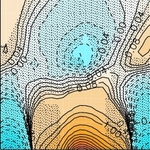