The Whole Atmosphere Community Climate Model (WACCM) simulates many features of the stratosphere, including the very active dynamics in Northern Hemisphere winter. During midwinter in some years, there are major breakdowns of the polar winter vortex known as sudden stratospheric warmings. The frequency and development of these events simulated in WACCM are similar to observations. After some observed warmings, the position of the stratopause (the temperature maximum that marks the boundary between the stratosphere and the mesosphere above) in high latitudes is displaced to much higher altitude. The simulation of these events in a free-running model provides a tool for investigating their causes and evolution.

The composite is referred to the date (day 0, indicated by the dashed line) when the temperature maximum that constitutes the polar stratopause suddenly “jumps” discontinuously from about 40 km altitude to near 80 km. The elevated stratopause event is initiated by planetary wave-mean flow interaction, which reverses the zonal wind in the stratosphere from westerly to easterly and drives a strong circulation anomaly, with descent below 70 km and ascent above, just before the stratopause jump at day 0. After the stratopause jump, westerly winds recover in the stratosphere and the stratopause descends gradually, accompanied by strong downwelling driven by small-scale gravity waves.

The details of the mechanism and its relationship to stratospheric sudden warmings are described in a recent paper by de la Torre et al. (J. Geophys. Res., 2011, submitted). 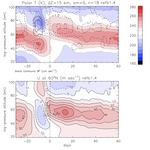