The CONvective TRansport of Active Species in the Tropics (CONTRAST) Experiment

ACD scientists in collaboration with colleagues from seven universities successfully sampled atmospheric composition over the Western Pacific warm pool region during the season characterized by massive convective storms.  The CONvective TRansport of Active Species in the Tropics (CONTRAST) experiment successfully concluded its field phase during January-February 2014.

Deep convection redistributes chemical trace gas species throughout the troposphere and strongly influences the chemical composition of air entering the stratosphere. To investigate the impact of deep convection on chemical composition and ozone photochemical budget, the CONvective TRansport of Active Species in the Tropics (CONTRAST) Experiment was conducted from Guam (13.5° N, 144.8° E) using the NSF/NCAR Gulfstream V (GV) research aircraft during January and February 2014. The experiment was part of three coordinated experiments to target the tropical Western Pacific during the Northern Hemisphere winter, when and where the most extensive deep convection in Earth’s climate system develops. The partner missions were ATTREX (Airborne Tropical Tropopause Experiment), which deployed the high-altitude NASA Global Hawk, and CAST (Coordinated Airborne Studies in the Tropics), which used the UK FAAM BAe 146 research aircraft to investigate the lower to mid-troposphere of the Western Pacific. A total of 16 research flights were conducted using the GV, with measurement of ozone, CO, CH4, and CO2, as well as a large suite of chemical tracer measurements including organic and inorganic halogen species, NMHCs, and OVOCs.  The research flights from Guam covered 20°S to 40°N latitude, 130°E to 165°E longitude, and 0.1 to 15.2 km ASL in altitude, successfully sampled the recent and aged outflows from active deep convective storms and defined the background chemical conditions of the tropical Western Pacific during boreal winter.  The results are expected to bring new insights into the ozone and halogen budgets of the tropical troposphere.  These airborne observations, especially in combination with the CAST and ATTREX data, provide key measurements and diagnostics for evaluating and constraining chemistry-climate models.   The NESL ACD scientists are significant part of the CONTRAST science team and are currently working on post campaign data analyses and modeling in collaboration with university colleagues.

Figure 1. Flight tracks of 16 research flights. The map is centered at Guam with 1000 nmi and 1500 nmi range rings, magenta and cyan respectively, indicating typical GV flight operation region. The vertical ranges of the three aircraft are shown on the right side of the map.

Figure 2. The GV payload during CONTRAST. The instruments are labeled by their inlet positions. For more information on this measurements, see the following two links: 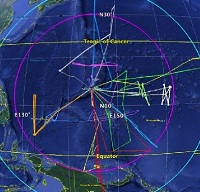