The importance of lateral boundary conditions (BC) in regional atmospheric transport models or numerical prediction models has been well established in the meteorological community. Much more recently, attention has also been drawn to the consideration of chemical lateral boundary conditions in regional chemical transport models (CTMs) and in air quality simulations, and the importance of the inflow of pollution on local air quality.

The methods applied for setting chemical BC in regional air quality models range from the use of a single background value for selected long-lived tracers, through the use of idealized or observed vertical profiles, to recent advancements of using time and space varying output from global CTMs. In principle, observations would be preferred for providing chemical BC, but in practice it is not possible to obtain measurements for the necessary species with the spatial and temporal resolution required by air quality models. This leads to uncertainties in the chemical BC used (e.g., non-representativeness on temporal scales, spatial interpolation errors), which then affect the results of the regional model simulations. 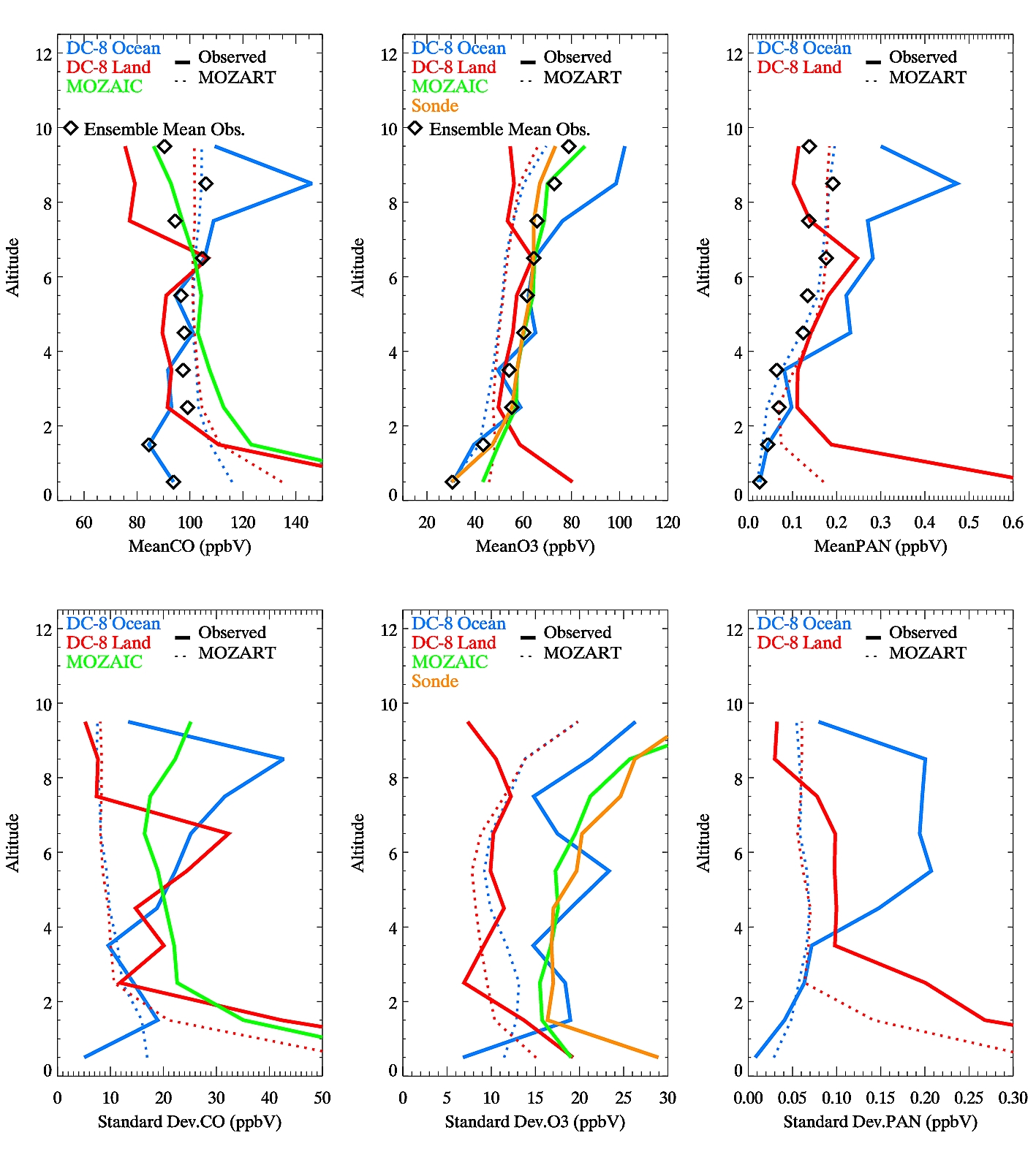 Figure. Mean and standard deviation of vertical profiles for CO, O3 and PAN from different data sets: ARCTAS-CARB flights over ocean (blue) and land (red), MOZAIC (green) and ozonesondes (orange). Observations are shown in thick solid lines, and MOZART regional averages (average over larger oceanic and land regions and a 2 week time period encompassing the ARCTAS-CARB flights) in dotted lines. The ensemble mean observed profile is denoted by symbols. For altitudes < 2km the ensemble mean is derived from flight over ocean and ozonesonde data only. Except for MOZAIC and sonde data, the data have been filtered for fire influence of wildfires in California. Click on figure for larger image.

Simulations from the global Model for Ozone and Related Chemical Tracers (MOZART-4) are frequently used for chemical BC in regional models and NCAR provides multi-year model simulations (https://www.acom.ucar.edu/wrf-chem/mozart.shtml) as well as software (https://www.acom.ucar.edu/wrf-chem/) for regional modelers. Using a comprehensive set of measurements including aircraft measurements from the ARCTAS-CARB field campaign, a joint collaboration between NASA and the California Air Resources Board) and the MOZAIC (Measurement of OZone, water vapor, carbon monoxide and nitrogen oxides by Airbus In-service airCraft) program as well as satellite retrievals from the Tropospheric Emissions Spectrometer (TES) and ozone sonde launches at Trinidad Head we evaluate the global model for its representativeness of chemical inflow focusing on the U.S. West Coast during summer 2008.

Both observations and global model reflect a large variability in pollution inflow on temporal and spatial scales, but the model captures only about half of the observed free tropospheric variability. Model tracer contributions show a large contribution from Asian emissions in the inflow. Recirculation and long-range transport of local U.S. pollution can also impact chemical BC, emphasizing the importance of consistency between the global model simulations used for BC and the regional model in terms of emissions, chemistry and transport. Aircraft measurements in the free troposphere over California show similar concentration range, variability and source contributions as free tropospheric air masses over ocean, but caution has to be taken that local pollution aloft is not misinterpreted as inflow. A flight route specifically designed to sample boundary conditions during ARCTAS-CARB showed a prevalence of plumes transported from Asia and thus may not be fully representative for average inflow conditions.

Sensitivity simulations with the regional WRF-Chem model show that the temporal variability in the pollution inflow does clearly impact modeled surface concentrations over California. We suggest that time and space varying chemical boundary conditions from global models provide useful input to regional models, but likely still lead to an underestimate of peak surface concentrations and the variability associated with long-range pollution transport. 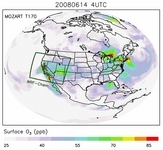